You use your WISD computer for a multitude of online purposes, from researching a service or a purchase for your department, creating and answering email, to possibly viewing private student data.  Because of the sensitivity of our jobs, all of us should be educated on the advantages of maintaining and updating the antivirus programs on our computers, running virus scans, and using caution when opening emails or downloading files from unknown sources.

Some emails can contain links that, if clicked on, will download a payload (a virus, worm, or trojan-horse) onto your computer.  Direct file downloads from untrusted sources can contain code that will install into and compromise your computer’s operating system (OS).  This is all called malware, and this malware can run the gambit of doing nothing much to your computer (rare) to causing so much random damage to your OS that the only fix available is to perform a clean reinstall of your OS. If this is the case then no file on your machine can be considered safe, so you lose everything, every file on your machine.

No one wants this to happen, and as much as we try to be watchful over time we can grow somewhat lax in our vigilance, a trait the more sophisticated malware infections do not share.  They constantly roam the internet, searching for a way to infiltrate personal computer systems and cause serious damage.  Or they sit on malicious web pages, waiting to be downloaded.  They ride as links in unsolicited emails that show up in your inbox.  The people who write these black-hat programs do not care what computers they attack or how much damage they do. They only care that they succeed in the attack.

There are many tools that the WISD uses to help insulate your computer from such attacks.  Every PC issued by the WISD comes preinstalled with antivirus software, with real time protection set to ‘on,’ and scheduled scanning active. Real time protection means every file downloaded to your computer is scanned for malware, as the download happens.  If it catches anything, then it will isolate the file and pop up a warning.  We also run a large antivirus system on our email server, helping to protect your email from unwanted malware.

But it can’t catch everything.  If a new virus emerges on the internet, before the AV company has a chance to update its DAT files (a small, downloaded file with information on the malware that the antivirus program uses to identify the problem file), your computer could become infected.  This is rare, but it can happen.

Email Encryption: What is it & Why is it needed?

Encryption involves disguising the content of email messages in order to protect potentially sensitive information from being read by anyone other than the intended recipient(s).

Encrypt your email if it contains any of the following:

How to: Email Encryption 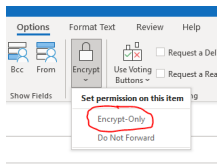 Passphrases are currently the safest way to secure your accounts. A password is different from a passphrase. Here's how:

Passphrase : a string of words replacing some letters with numbers and symbols

The Technology Dept. will NEVER send you a link to change your password.

Washtenaw ISD is committed to providing a website that is fully accessible and we are currently in the process of developing a new website to better meet the needs of our customers. Our new website will include improvements to ADA compliance and accessibility, and during this transition, we remain committed to maintaining our existing website's accessibility and usability.

It is the policy and commitment of the Washtenaw Intermediate School District not to discriminate on the basis of race, color, religion, national origin, sex, disability, age, height, weight, familial status, marital status, genetic information, sexual orientation or any legally protected characteristic, in its educational programs, activities, admissions, or employment policies in accordance with Title IX of the 1972 Educational Amendments, executive order 11246 as amended, Section 504 of the Rehabilitation Act of 1973 and all other pertinent state and Federal regulations.